Home | About Our Shop

Let's chat about your next tattoo:

Filament set out from the start to be different

“We wanted to be a part of our community, not just a business in our community. So we took a name that reflected Wabash’s history of being the first electrically lit city in the world.”

Matt hasn’t always been in the tattoo industry. While at the University of Kansas in 1996 Matt heard the Gospel for the first time and became a Christian. He knew he wanted to help people and seemingly the best track was to become a pastor. So for nearly 20 years Matt has been pastoring around the world from Los Angeles to New Zealand to Indiana.

Filament Tattoo Company opened on April 4, 2014, less than one month after Matt and Roger sat down to figure out how to open the best tattoo shop between Indianapolis and Fort Wayne.

Matt has been married for over 20  years to our “shop mom” Pam. They have seven children, the youngest three being triplets, and the oldest three adopted as teenagers 8 years ago.

He also loves to travel and has been to 43 different countries. In fact, he and his wife Pam traveled halfway around the world - just because they wanted

to try the food. 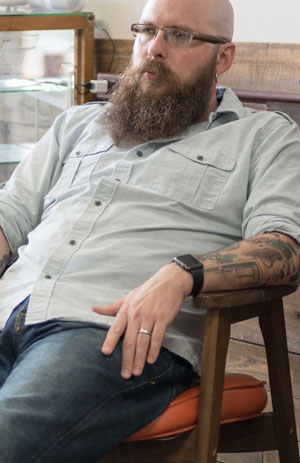